Top management of the five major airports in the Greater Pearl River Delta (GPRD) region met in Hong Kong on 25th March to attend the Chairman meeting of the Five Airports of the Greater Pearl River Delta in the implementation of Framework Agreement on Hong Kong/Guangdong Co-operation and Framework Agreement on Macau/Guangdong Co-operation. A Memorandum of Understanding was signed at the Chairman meeting. Management of Five Airports reached consensus on deeping closer co-operation between five airports in various areas as well as pressing ahead to accelerate collaboration between the airports of the GPRD region, bringing five airports co-operation to new heights.

At the meeting, Top management of five airports discussed and exchanged views on concrete business performance and future development of their own. Attending representatives also shared the views on related issues of mutual concern including the development of multi-modal transportation, the opening of low altitude airspace and the expansion of air traffic market and the development of airport economy.

Mr. Xia Xinghua, Vice President of Civil Aviation Administration of China expressed at his speech that Five Airports should facilitate the current opportunities ahead, deeping on closer cooperation in order to build a strategic co-operation platform. Many airports’ respective advantages to achieve win-win results, pave the way for adjustment for Pearl River Delta’s industry structure as well as making great contribution to the economic development in the region.

Ms. Liu Suning, Executive Director of Macau International Airport Co. Ltd gave speeches at the meeting: “Along with the Framework Agreement on Macau/Guangdong Co-operation signed in Beijing on 6th March, the future development of Macau aviation will mark a iconic effect in accordance with the embodiment of the Frame Agreement Policy. With the rapidly growth of economic in the GPRD region, demands for air transportation continue to surge; Macau International Airport will capitalize on the opportunities brought up by the Frame Agreement in speeding up of the construction of transport infrastructure, implementing the objective in seamless air, land and sea connection between Macau and Guangdong as well as to further promoting “the seamless journey” in respect of  expediting inter-modal transport with different transportation fields. Owing to the step up cooperation on the different fields of transportations, resulting in the speed up the integration with the Pearl River Delta region Macau International Airport could better leverage its unique advantages and function as small and medium airport so as to ensure a better development consisted and making great contributions to the region.”

Lastly, The MOU endorsed the topics discussed and the relevant specific works concerned in detail. All parties agreed in consensus to implement the Outline of the Plan for Reform and Development of the Pearl River Delta on first priority. The Memorandum of Understandings for A5 chairman meeting was jointly signed at the meeting by Mr. Liu Zijing, President of Guangdong Airport Management Corporation; Mr. Stanley Hui, Chief Executive Officer of the AA; Ms. Liu Suning, Executive Director of Macau International Airport Company Ltd; Mr. Wang Yang, Board Chairman of Shenzhen Airport Management Company Limited and Mr. Li Guoming, Board Chairman of Zhuhai Airport Management Company Limited.

With consolidating the co-operation in the traditional field of aviation, all agreed to respect the unique development orientated within A5 members and further enhancing co-operation in planning, operation, management and other fields of cooperation. On collaborative development, pressing ahead with the construction of notification mechanism to further exchange air traffic movement to better achieve mutual interest in exchanging information platform, which will marks a significant milestone in accordance with the mission of five airports to complement each other in the development overall in the GPRD region. The next A5 chairmen meeting in the greater Pearl Delta region will be chaired and organized by Shenzhen International Airport in turn in 2012. 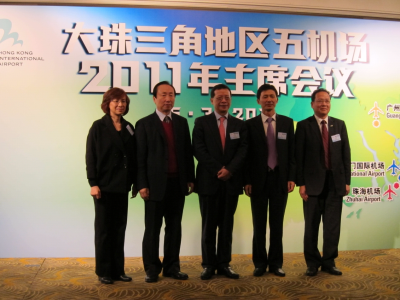