2022 / 12 / 09         14~22°C         55~90%
繁 简 PT
Airport operation requires professional techniques and security software and hardware, while the quality of services provided to airport users is also required to follow the internationally recognized standards. In order to fully understand the trend of international development, learn from the excellent management standard of partners in the same industry, as well as keep updated and lower the risk of being marginalized, Macau International Airport Co. Ltd. (CAM) has been actively participating international and regional cooperation platforms, including the international Airports Council International (ACI), the regional East Asia Airports Alliance (EAAA) , the China Civil Airports Association (CCAA) in Mainland and the nearby A5 Forum. Moreover, CAM emphasizes to make use of its own advantages to form airport alliances, aiming to unite the industry, build a platform for information exchange, interaction, communication and cooperation. Thus CAM has established sister airport relationships with several small and medium sized domestic and overseas airports. China and Portuguese-speaking Countries Airports Conferences are also regularly held in Macau to build a platform for communication and cooperation for Mainland China, Portugal and Macau.

The Macau SAR Government is always dedicated to promote relationships among Portuguese speaking countries, EU countries and Mainland China. Macau International Airport (MIA) has quite a historical connection with Chinese-Portuguese close cooperation and the building of MIA is exactly the result of the friendship and good cooperation of China and Portugal. MIA has always been playing the role of an active and hard-working exploiter in the long-term cooperation of Chinese and Portuguese speaking countries’ airports. As early as a decade ago when the Democratic Republic of Timor-Leste was established, MIA gave full financial and technical support, helping the smooth development of its airport and air traffic management. 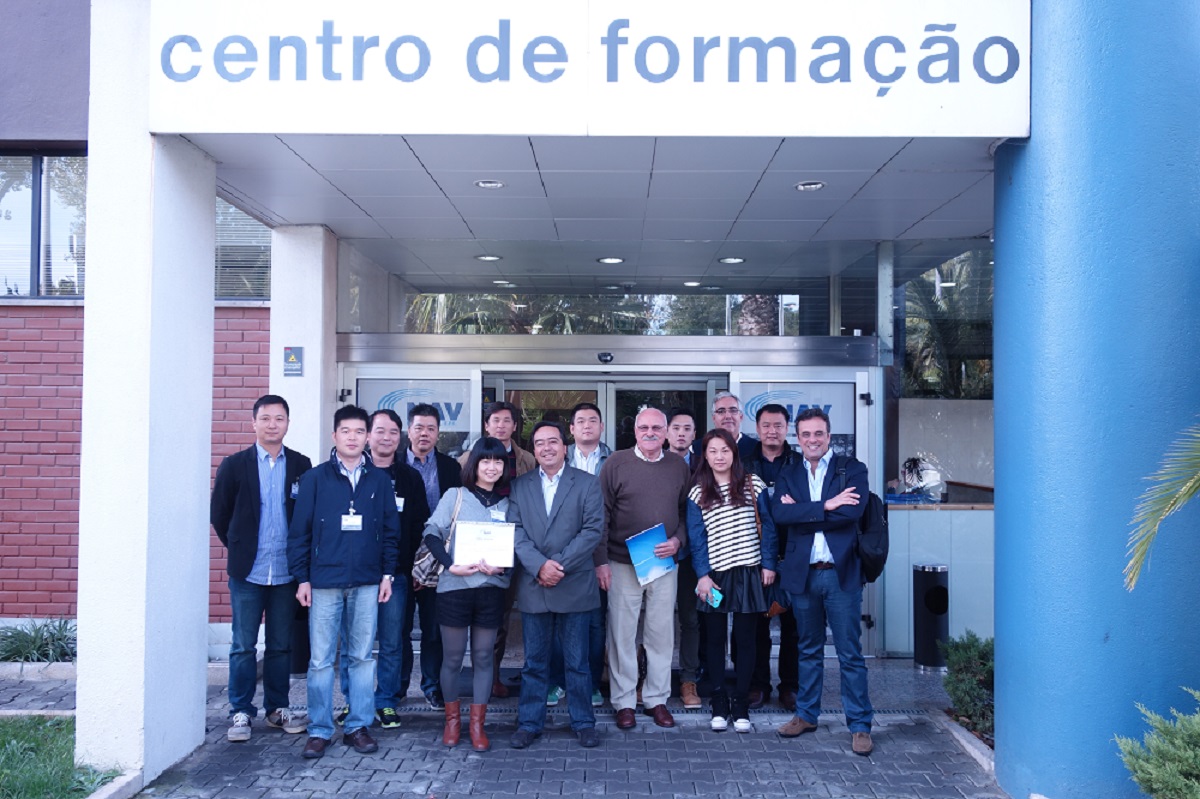 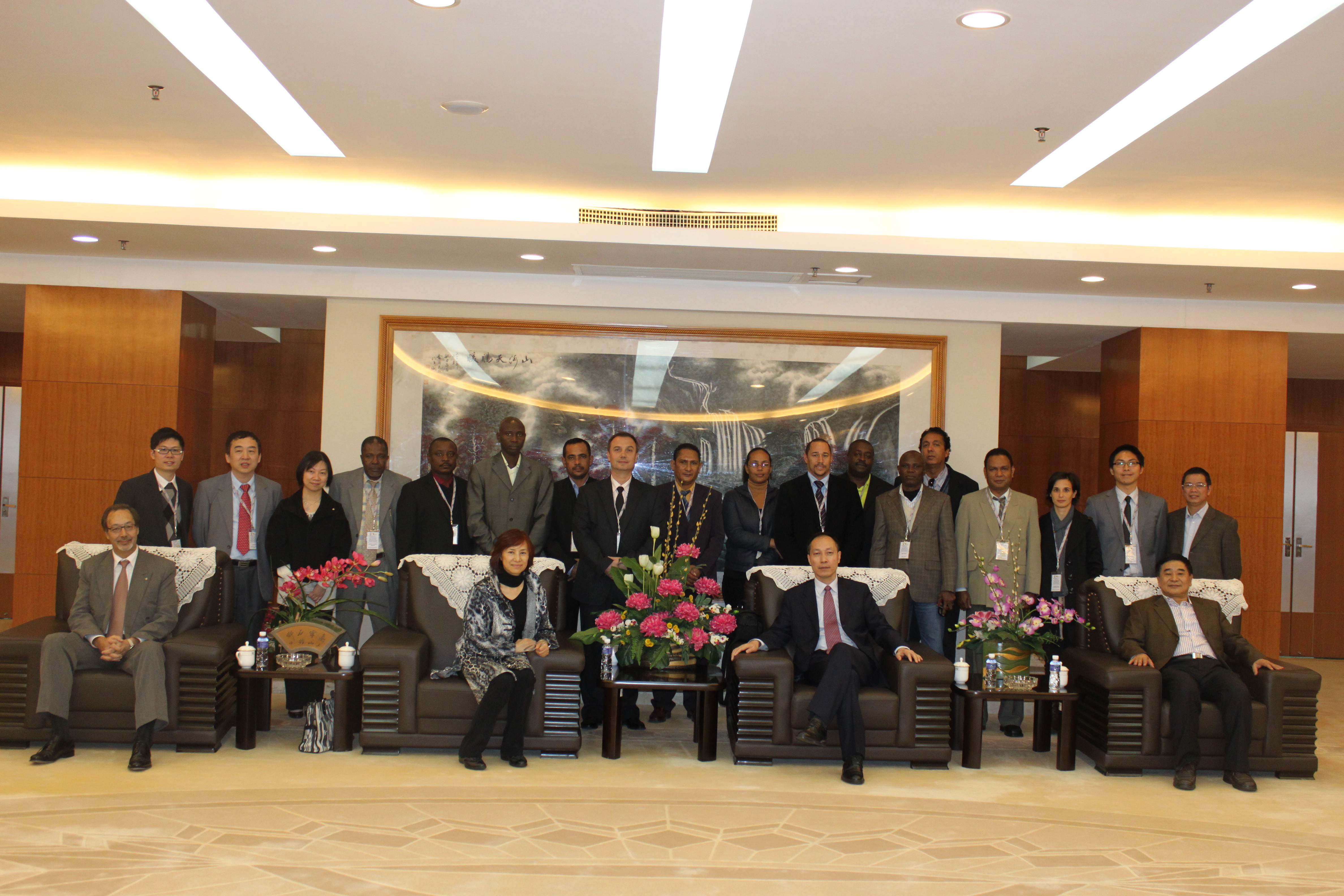 In order to strengthen the communication and connection of China and Portuguese speaking countries and to promote cooperation among airports, CAM and the Supporting Office to the Secretariat of China and Portuguese Speaking Countries Economic Cooperation Forum (Macau) organized with the coordination of Macau Civil Aviation Authority the 1st “China and Portuguese Speaking Countries Airports Conference – Macau 2004” on 7th to 10th December 2004. The guests included Macau SAR Chief Executive Mr. Edmund Ho, Vice Director-General of the Liaison Office of the Central Peoples Government in Macao Mr. He Xiaowei, Vice-Minister of Civil Aviation Administration of China General Administration Mr. Gao Hongfeng, etc.

The 2nd “China and Portuguese Speaking Countries Airports Conference – Macau 2007” was held in Macau on 6th-8th December 2007. The conference was organized by CAM, co-organized by Supporting Office to the Secretariat of China and Portuguese Speaking Countries Economic Cooperation Forum (Macau), Civil Aviation Authority of Macau, Macau Government Tourist Office, Macau Trade and Investment Promotion Institute and Institute of Macau Civil Aviation. Specialists from different places were invited to have in-depth discussion on four major topics: 1. civil aviation operation system and airspace management, 2. airport and airline operation and development, 3. cooperation of civil aviation industry in China and Portuguese speaking countries, and 4. airport infrastructure. During the Conference, there was a simultaneous exhibition of products and services related to the airports and aviation industries, aiming at establishing commercial contacts between participants and suppliers of the industry. In addition, in order coordinate with the promotion of Macau Aviation Day, the participants were invited to attend the related activities arranged by Civil Aviation Authority of Macau.

The 3rd “China and Portuguese Speaking Countries Airports Conference – Macau 2010” was held on 8th- 9th December 2010. It was organized by CAM and Supporting Office to the Secretariat of China and Portuguese Speaking Countries Economic Cooperation Forum (Macau) and co-organized by Civil Aviation Authority of Macau and Institute of Macao Civil Aviation. The Macau Foundation sponsored this event; the Macau Government Tourism Office and the Macau Trade and Investment Promotion Institute were the supporting entities of this event and the local airline – Air Macau was the official carrier. This conference focused on three themes: “Regulation, Airspace Coordination and Cooperation Framework System”, “Airports and Airlines, Partners connecting the world” and “Airport Development, Innovation and Technology”. The involved field included government departments, airports, airlines, logistics and transport, air traffic management, engineering information technology, etc.

In addition to this and with the objective of achieving practical results in cooperation, 5 cooperation protocols and memorandums were signed with various parties, including the ones between CAM and NAV Portugal and between ANA - Aeroportos de Portugal. The CAAC Eastern Regional Administration and CAAC Central & Southern Regional Administration also separately signed letter of intent for cooperation in training programs with ANA - Aeroportos de Portugal and CAM. These agreements would increase the scope of cooperation between airports in China, Portugal and Macau in the future. The training programs for airport professional personnel might be extended to other Portuguese speaking countries. At the same time, CAM signed the memorandum with China National Aviation Fuel Supply Co., Ltd to strengthen the safe operation of Macau International Airport. 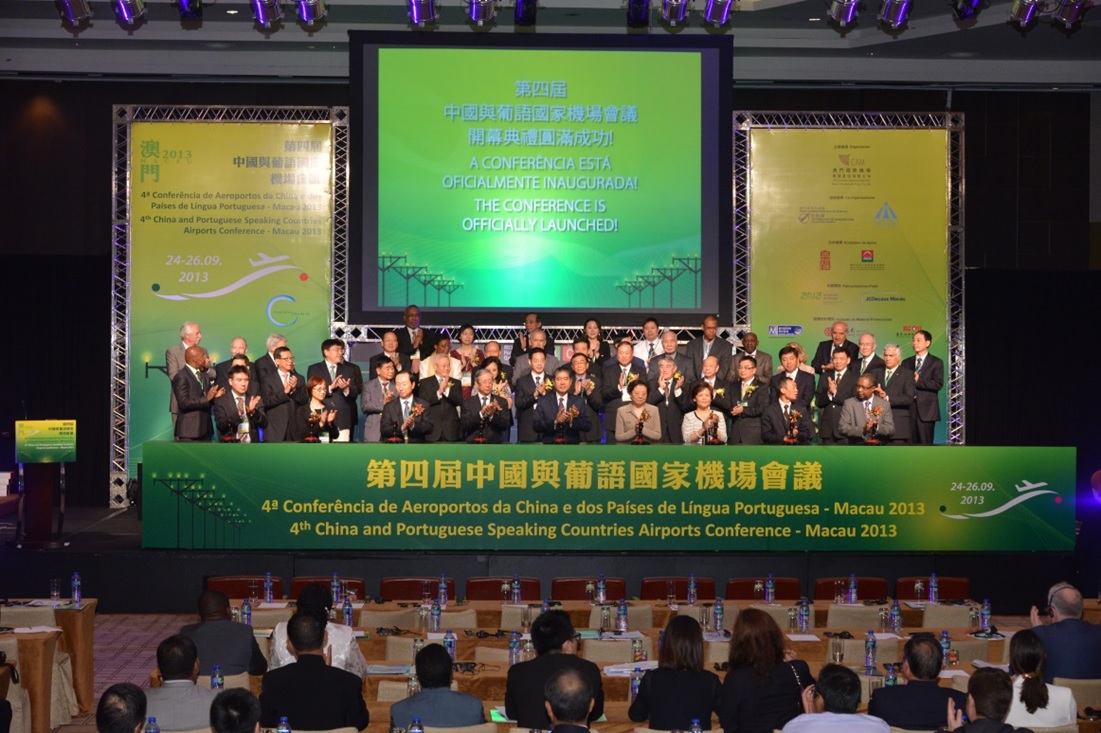 With the strengthening role as a platform between Mainland China and Portuguese speaking airports, MIA has been continuing with the exploration of cooperation scope. We invited renowned companies in the field of aviation, along with senior staff members from airline companies to have deeper understanding on the status of the aviation industry and its future development.

Since the 1st “China and Portuguese Speaking Countries Airports Conference” was held in 2004, CAM has been actively driving China, Portugal and Macau to expand room for cooperation in the field of aviation, and facilitating financially and physically the exchange and training projects for the air traffic control and airport management personnel from China, Portugal and Macau. This enhances the cooperation in the industries and among civil aviation departments in the three places, so that Macau SAR can concretely utilize its unique platform advantage and let the Chinese and Portuguese air traffic control units to have better understanding about each other. This builds a solid foundation for the future cooperation in civil aviation and other related fields of China and Portugal.

In these years CAM cooperates with Portugal civil aviation organizations to establish relevant cooperation mechanism between Mainland China and Portugal. CAM puts forth every effort to implement concretely the role of Macau to be a platform between Mainland China and Portuguese speaking countries, sponsors and organizes special trainings in Portugal for air traffic control and civil aviation administrative staffs from Macau and Mainland China. Besides this, CAM has also cooperated with Civil Aviation Management Institute of China to arrange trainees to receive training in Portugal, and coordinated with sister airports Lisbon International Airport and Frankfurt Airport and insurance company in London to arrange visits and study tours. From 2005 to 2015, under MIA’s arrangement, personnel training projects coordinated by China, Portugal and Macau have successfully been arranged. There are up to 533 personnel (including trainees from CCAC Administration and from Air Traffic Management Bureau in North China, East China, Central and Southern Region, from Civil Aviation Management Institute of China, as well as management staff and air traffic controllers from MIA) who got benefitted through this cooperation platform. 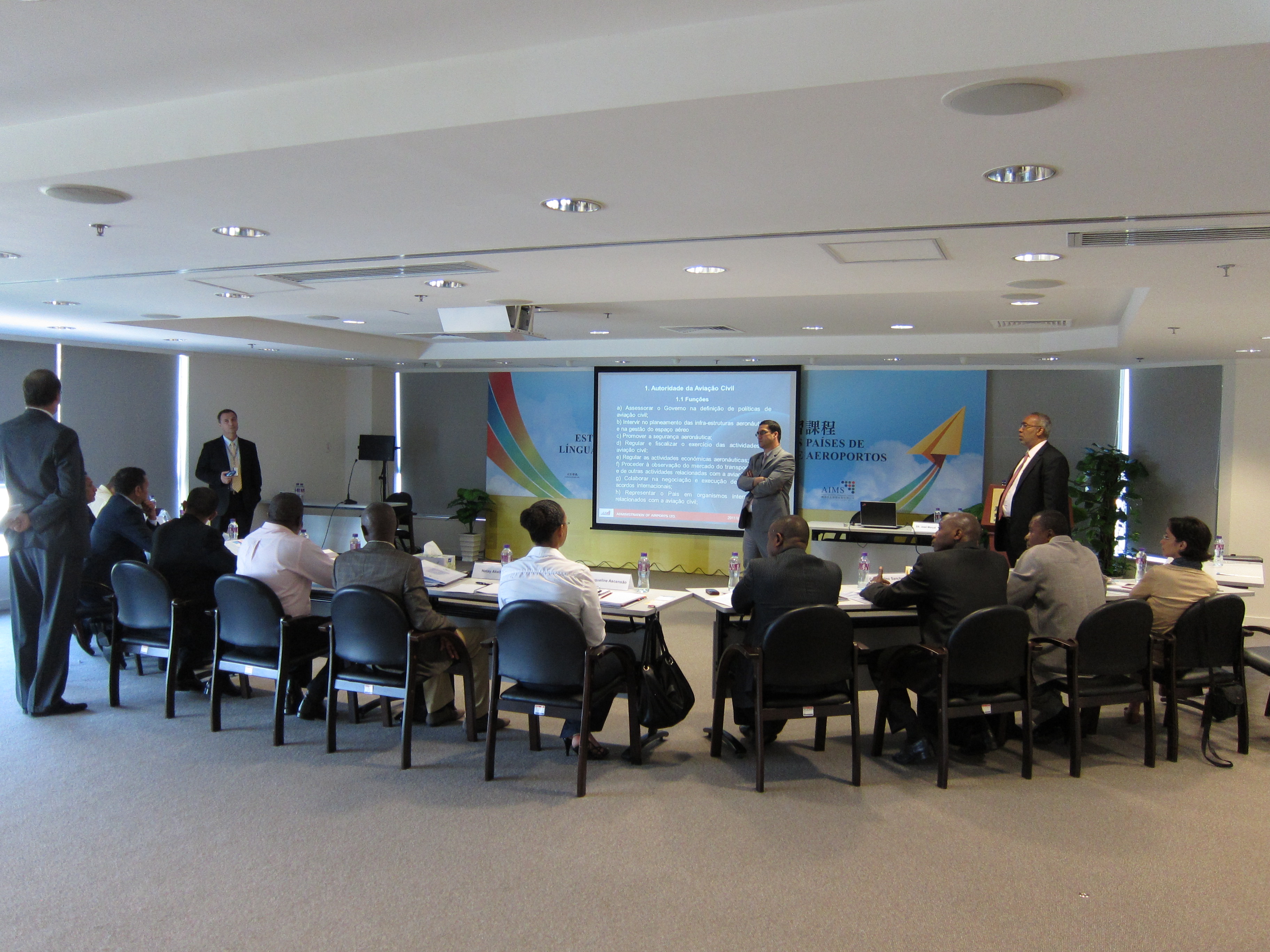 Macau establishes extensive network with Portuguese speaking countries through various channels over these years due to language, cultural and historical reasons. On 28th November – 4th December 2011, CAM worked with Supporting Office to the Secretariat of China and Portuguese Speaking Countries Economic Cooperation Forum (Macau) again to organize the “Senior Management Internship Programme for Airports of Portuguese Speaking Countries” in Macau. The main objective of this program is to let Macau play to role of platform between China and Portuguese speaking countries to strengthen the civil aviation exchange and cooperation between Mainland China and the Portuguese speaking countries, provide an opportunity for the participants to share expertise and experiences, and to become more familiar with the respective airport systems and to build professional and personal networks.

A total of 12 officials and experts from the Republic of Angola, the Republic of Cape Verde, the Democratic Republic of Timor-Leste and the Republic of Guinea-Bissau these four Portuguese speaking countries which allowed them to debate several relevant subjects, including civil aviation organs and regulations, airport operation, marketing, safety, security and maintenance, as well as related legal issues and application of information technology and virtual networks to improve and innovate airport services. In the end CAM organized a visit to Macau International Airport (MIA), Guangzhou Baiyun Airport, Civil Aviation Administration of China (CAAC) Central and Southern Regional Administration and the Air Traffic Management Bureau. The top leaders of these institutions warmly received the Macau and Portuguese Speaking Countries delegation, mentioning their good cooperation with CAM and Macau and giving the participants an opportunity to exchange ideas with the expertise in Guangzhou.

Every participant gave positive feedbacks about the programme. Mr. Nuno Évora Santos, the Director of S. Pedro International Airport, Cape Verde, made a speech on behalf of all students at the closing ceremony stating that the objectives of the programme were fully met after 5 days of intensive programme, “with the Macau experience we could know the state-of-the-art on airport management in the countries involved, as well as learning and adopting new and modern practices of operation and management, to increase the quality and efficiency of the services we provide to airlines, passengers and users.”