The signing ceremony was officiated by Mr. Deng Jun, Chairman of the Board of Directors and Executive Committee of CAM and Mr. Ma Yongsheng, General Manager of WUXI Airport Co., Ltd. and was also honoured with the attendance of Mr. Gao Min, Vice Secretary General of WUXI Municipal People’s Government, Mr. Ng Fok, Executive Director of CAM, Mr. Simon Chan, President of Civil Aviation Authority of Macau, Mr. Yang Qilong Deputy General Manager of Wuxi Airport Co., Ltd , Mr. Chan Ming Kam, President of Global Group, Mr. Li Kun, Vice Chairman of the Board/President of Shenzhen Airlines as well as senior management of the both sides to witness the signing. Areas of cooperation covering the initiation of an air route between WUXI City and Macau, marketing development, information sharing, management cooperation and other related business areas. The signing of this Sister Airports LOI was said to be meaningful to the development of aviation business between Macau and WUXI.

It can be traced back to the 30th June of this year when a delegation from the WUXI Government, led by Mr. Gong Peixin- Executive Deputy Mayor of Wuxi Municipal Government visited Macau aiming to discuss future aviation development opportunities between Wuxi City and Macau SAR. Just in four months’ time, huge effort has been putting together by carrying out the threading work between airlines and travel agencies. Finally, Shenzhen airline acted as a fusion point that benefited the development of the two airports’ economy and aviation industry, creating a prominent transportation advantage, successfully put up, the bridge. By signing sister airports LOI, it will enhance aviation development and promote competitiveness, strengthening each other’s advantages and mutual benefits, at the same time, it will upgrade its management standards. Macau International Airport Company Limited and WUXI Airport Co. Ltd. will seek a long-term cooperation relationship and joint development, hoping the aviation industry and economic development for both sides will be enriched, thus creating a win-win situation.

This year during the month of November 2006, Macau International Airport, has been awarded the Award of Merit Low Cost Airport of The Year by Centre for Asia-Pacific Aviation (CAPA). This honour has affirmed Macau International Airport’s development strategy, the team spirit and professionalism generated by the airport operations in the aspects of management; ground handling services and airport security. MIA in keeping the business development models among traditional carriers, it has the ability of providing different aviation services. The entry of low-cost airlines allowed tapping into a totally different and new market segment. This group of travellers has no desire for being serviced daintily, but for low fare and efficiency services only. Macau International Airport well positioned as a preferred entry point to the China market, provides a convenient connection to the China border, allowing easy access to numerous provinces in southern China is an ideal airfreight centre. It won the award of “CAPA Asia Pacific Airport of the Year, 2004” for its excellent performance and achievement in the past year and was awarded 2006 Air Cargo - Award of Excellence.

Mr. Deng Jun expressed in his speech that in recent years, because of the rapid development of Macau’s economy, allowing its travel and tourism industry as well as its conference and entertainment industry to enjoy vigorous growth and the support of the Macau SAR Government given to the aviation industry made Macau International Airport reach a new record in its traffic volume. MIA will continue to do it best, to cope with Macau’s economic development, to expand its routes network, perfecting its hardware and software, developing its international and china market air traffic services and to upgrade its service levels.

Wuxi Airport perches to the north over the Yangtze River, to the southern shore of the Lake Taihu, with Suzhou to the east and city centre to the west. Wuxi is a rapid growing city with major foreign investments, is one of the region's most important commercial and oldest industrial city. Wuxi is particularly attractive for its beautiful sightseeing spots. Wuxi possesses an important transportation position in the Yangtze River Delta region, is a famous city with long history in the southern part of the river. Wuxi Airport is situated at the city’s high-technology development zone, heading to the city centre of Wuxi is 14km from the airport, the neighbouring city of Suzhou is only 23 km with the Shanghai-Nanjing Expressway and No.312 National Freeway close by. Because of its comprehensive high-speed road networking causes the airport and those cities near to the southern Jiangsu very accessible.

The launch of the Macau – WUXI route is meant to boost traveller’s confidence within Macau, WUXI and nearby cities within the Southern Jiangsu region of China. The first flight departed from WUXI at 08:55 on the 20th November 2006 (today), arrives Macau International Airport at 10:35. The return flight will departs Macau International Airport at 11:50 and arrive WUXI at 13:50. Since then, there will be one scheduled flight per day between the two destinations. 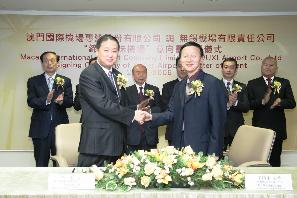