The purpose of the 3rd Regular Meeting was to conclude the results accomplished by the Alliance's working groups, including:
- Establishment of the EAAA web page with links to other members on the home page of each members' website;

- Common understanding reached and agreed that government regulations could not be ignored regarding the adoption of other members' native language and the standardization of signage and pictograms in member airports' terminals;

- Based on member airports' proposals, a glossary will be created for members' reference purpose.

In the session selecting the next host, all members expressed their compliments to CAM' s constant commitment and sincerity, and unanimously voted for CAM to host EAAA' s 4th Regular Meeting in spring 2005. 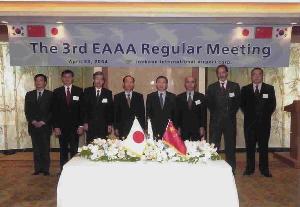